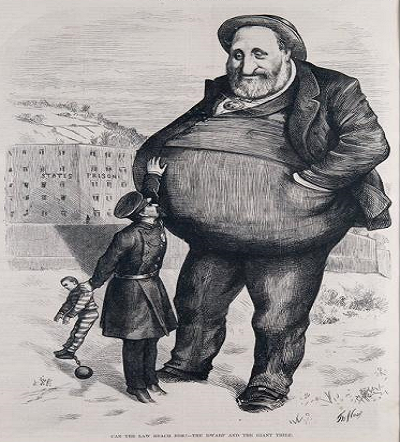 Corruption Reflections Index (CRI) is constructed by Dincer and Johnston (2017). CRI is an index based on the corruption stories covered in Associated Press (AP) news wires which are electronically available online via LexisNexis. Using news stories to measure corruption is nothing new. Gentzkow, Glaeser and Goldin (2006) measure corruption in the U.S. at the national level using the New York Times and local newspapers covered by Ancestry.com. They search for the words “corrupt” and “fraud” (and variants such as “corruption” or “fraudulent”) and count the appearance of news articles (or pages) containing those words. This count gives a measure of the amount of space newspapers give to stories related to corruption or fraud. They then deflate these counts by the number of articles (or pages) containing the word “political” (and its variants) which measures the amount of space given to politically relevant stories. Deflating the word counts by “political” is equivalent of trying to measure corruption divided by the size of the government. CRI is constructed following a state level version of that methodology; in addition to the search words that Gentzkow, Glaeser and Goldin (2006) use, Dincer and Johnston (2017) also search for the word “bribe” (and its variants) to construct CRI. To limit the search for the corruption related stories in each state they use two levels of geographical identifiers: United States as the country identifier, and the name of the individual state as the state identifier. While using local newspapers is an option, using AP news wires has several advantages in terms of minimizing possible media bias. First, local media sources are likely to be subjective. Second, local media coverage is likely to reflect topic persistence, topic resurgence, and even topic fatigue, none of which are necessarily positively correlated with overall corruption. CRI is not a perfect measure of corruption at all, but at least it does not suffer from some of the problems regarding Corruption Convictions Index (CCI). AP news wires cover corruption stories not only about federal officials but also about city and state level officials—all important levels of government in U.S. states. The coverage is not limited to convictions either. The news wires also cover allegations, trials, and appeals, along with newsworthy stories. According to Dincer and Johnston (2017)

CRI should not be conceptualized as a measure of corruption as such, but rather as a diffuse reflection of it. We could, by analogy, think of light reflected off an uneven surface: we would not expect the clarity of a mirror image, but might still be able to judge attributes such as brightness or color, as well as significant trends in both. While we would naturally refrain from over-interpreting such a reflection, we would still be gaining information (Dincer and Johnston 2017, 137).

The CRI score for a given state in a given year indicates the number of news stories between January 1 and December 31 that mention the terms “corrupt”, “fraud”, and “bribe” (and their variants), divided by the number of pages mentioning “politic” and its variants. For Illinois in 2010, for example, the score is calculated thus: 253/556 which is approximately equal to 0.45. The mean CRI score for all 50 states covering the three decades between 1981 and 2010 is 0.29, with a median of 0.25; the highest score is 2.15 for the state of Utah in 1999, while the lowest is 0 for several states such as Montana and the Dakotas in 1994.

The states which are perceived to be corrupt by many such as Alabama, New Jersey, Illinois, New York, and Louisiana score consistently high in CRI. The only surprising state among the most corrupt is Utah.  In fact, according CCI, Utah is one of the least corrupt states. Where does the conflict between the two indices come from? It is most likely due to the 2002 Salt Lake City Olympic bid bribery scandal. Although charges were brought against the leaders of Salt Lake’s bid committee by the Justice Department, everybody was later acquitted. When I leave the 5-year period 1998-2002 out, Utah’s average CRI score is actually lower than the overall average. The five least corrupt states according to CRI based on the sample period averages are New Hampshire, Vermont, Maine, and the Dakotas, which is again surprising since the Dakotas are the two of the most corrupt states according to CCI. This is partly because CCI is constructed by deflating the number convictions by population. CRI, on the other hand deflates the number of news stories covering corruption by the number of news stories covering politics in each state. The effect of a conviction on CCI is a lot bigger than the effect of the news story about that conviction on CRI, particularly if it is not a high level public official. Cordis and Milyo (2016) find that a majority of the convictions reported by the Justice Department’s Public Integrity Section and used to construct CCI are in fact regarding low level public officials. The average values of CCI (left axis) and CRI (right axis) between 1981 and 2010 for lower 48 states are given in the figure below. 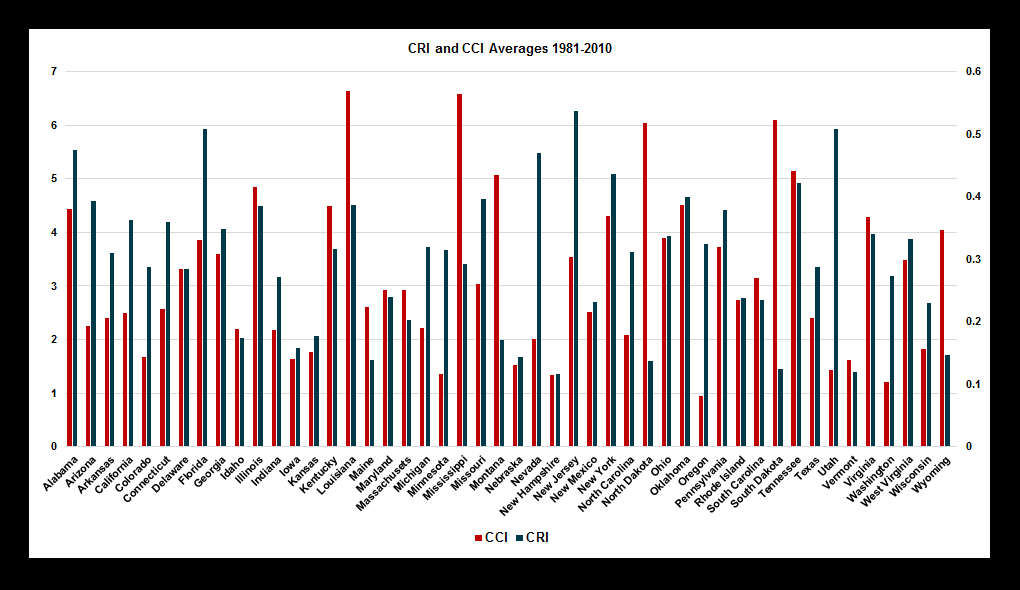 Within state variations in CRI is also a lot smaller than CCI in the majority of the states. Any convictions-based index standardized for population is likely to be more variable in states with small populations, like the Dakotas, because a handful of cases will affect rates much more there than in, say, New York or Texas. For example, the number of convictions per 1 million people in Louisiana increased from 7 to 14 between 1989 and 1990 and declined to 2.5 in 1991—doubling in one year and decreasing more than five fold in the next. Other states show similar variability in convictions, even though it is unlikely that underlying levels of corruption are changing so markedly. Within-state variation over time in CRI is a lot smaller. In New Jersey, for example, the coefficient of variation of the convictions based index standardized for population between 1981 and 2010 is greater than 0.5 while that of CRI is approximately equal to 0.25. Figure below presents the coefficients of variation of both CCI and CRI for the lower 48 states. 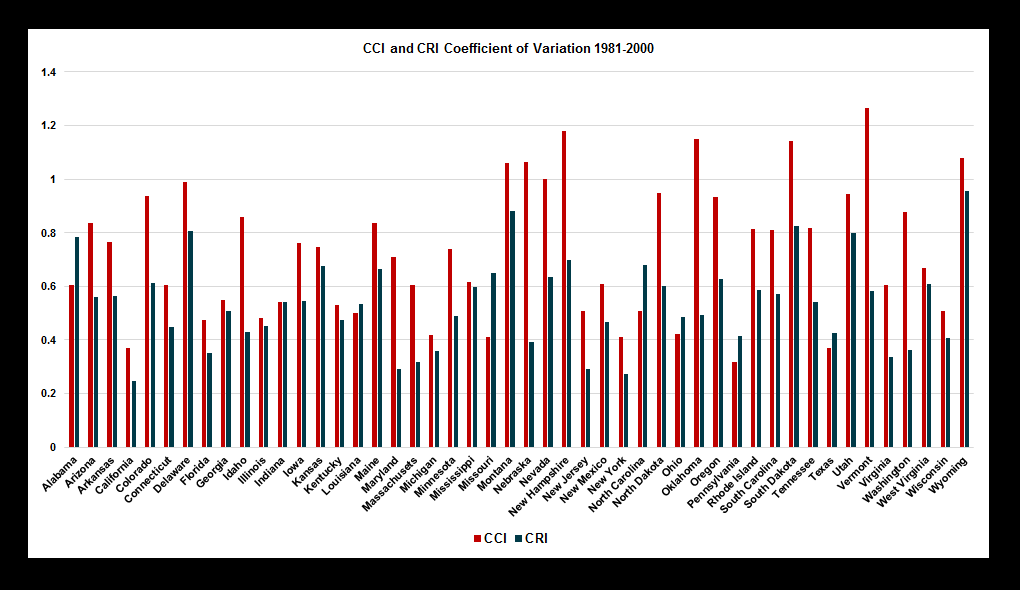 Although CRI offers several advantages over CCI, it is not a perfect measure of corruption either. In less corrupt states since the public officials are expected to have higher ethical norms, media are likely to pay greater attention to corruption and respond with greater coverage. In other words, CRI might be biased in such states as Vermont. The bias, nevertheless, could not be that big. CRI in Vermont, for example, is consistently and significantly lower than it is relative to the states perceived by many as corrupt such as Florida and New Jersey. Another advantage of CRI is it is constructed using AP news wires instead of local newspapers. Local newspapers are likely to be more subjective and they might be owned or influenced economically by some of the same interests involved in corruption stories. Because CRI uses AP news wires, the subjectivity bias is a lot smaller and it is likely to be systematic across the states.